The Moncler shop in Stockholm with 55HX® aluminium installation. 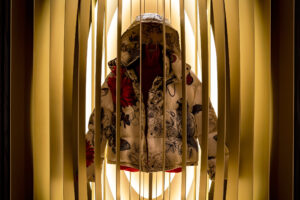 THE MONCLER SHOP IN STOCKHOLM WITH 55HX® ALUMINIUM INSTALLATION

Shopping at Moncler is always an experience. But in the Moncler shops of New York, Stockholm and Mexico* shopping gets an extra dimension. After the flagship store in New York, Belgian artist Bardula was asked by Moncler to also design two shining installations for the stores in Stockholm and Mexico City.

A tribute to Renaissance

Both pieces of art function as a narrative reinterpretation of the Renaissance. They are a representation of Man and his ability to discover, understand and create. The human shaped object at the heart of the artwork, which covers and protects a human being, is a symbolic reminder of Leonardo da Vinci’s drawing of the Vitruvian Man, a man in the centre of a circle inscribed in a square.

The monumental art pieces have been created through successions of golden metal blades producing the kinetic volume constructed from curves, changing as the viewer moves around them. The stretching of the oval shape represents a beating heart, which radiates energy and symbolises the eternal rebirth of mankind. In the middle of the artwork, there is a human shaped object, being magnified with an undulating lighting scenario. It gives the impression of a living person coming out of the shining heart.

Both artworks are made of gold-coloured aluminium blades forming together a suspended oval space within a rectangle volume. Light made of white LED shines through the succession of the oval shapes in the back and along the blades, enhancing the kinetic construction with a variation of different white lights, reflecting in metal and revealing bronze, copper and deep amber shades. It brings you in another dimension.

An everyday material with unique qualities

As for the Solaris installation in the Moncler flagship store in New York, Bardula co-operated with metal specialist and art restorer Michel Delarasse. They again opted for 55HX® aluminium sheets from Aluminium Duffel BV. In order to give the metal blades the right colour to fit with the sophisticated systems of LED lights, the 55HX® sheets were anodised in gold.

“The right colour of the metal blades is an important factor. It has to fit with the sophisticated system of LED lights conceived by Bardula. The gold anodised aluminium we selected for New York produced a fantastic result, very subtle and in line with the original design. The choice to use the same material for the installations in Stokholm and Mexico City was quickly made”, Michel Delarasse said.

Bardula’s pieces of art also show aluminium’s full potential for creative interior design. The special surface and deformation qualities of aluminium allow it to be creatively shaped. It is easy to bend, perforate, punch and expand and in combination with either natural or colour anodising, a unique look can be created. Aluminium is art.

(*) And the story of Bardula for Moncler continues. After the making of this article, the artist created a fourth artwork for the Moncler shop in Moscow.

Development by Peoplewalking • © All rights reserved.